Our current projects are based across South Africa, a large, beautiful and, in many places unspoiled country. It offers visitors world heritage sites, mountains, beaches, cities, adventure and wildlife in abundance while also sharing its unique traditions and customs. Visiting Africa can seem daunting to many people and it has been said that South Africa is a perfect destination for ‘first timers’ As much as the country is more similar to the western world than elsewhere in Africa, there are still huge cultural differences. It is these that make South Africa the magnificent place that it is.

These simple, suggested, tips will help you get the most out of your time in South Africa, whether as a first timer or a returning visitor. They will also make sure you don’t annoy the locals.

Do your research before you go.

Read, Google, watch, any and everything you can to find out about the country and it’s political and cultural history before you go. South Africa has a controversial history with many changes only being made in the last few decades. Make sure you have an understanding of this and are prepared for differences between South Africa’s culture and your cultures because they will occur.

Continue your research once you’re in South Africa.

Most cities have a handful of museums that touch on not only apartheid but also specific regional history. In cities like Cape Town, where they compete with Table Mountain, penguins and wine tasting, these are often over looked on the lists of must sees. 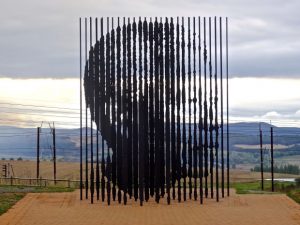 This monument indicates the site at which Mandela was captured.

Understand how big the country is!

South Africa’s landmass is 1,219,912 km2 with Cape Town and Johannesburg being 1,402 km from each other. Make sure you research how you’re going to get from one stop on your itinerary to the next, whether that’s by bus, domestic flights or car rental.

Plan how you will get from A to B prior to your arrival in the country.

Unless you are in one of the largest cities, public transport is either unreliable or not available. Locals will use shared taxis and if you are comfortable doing so they are a great and cheap way to get around for short distances. However, you need to be very certain where you’re going and prepared to pay more than locals! There are long distance buses and inner city trains however striking staff can be a potential issue.

Learn the rules of the road if you rent a car.

If planning to cover large distances, car rental can work out as an affordable option that also enables you to see more of the country along the way. However, it is advisable to learn South African rules of the road before setting off as signals and gestures that mean one thing at home may mean something different in South Africa.

Get off the beaten path and get out of the cities.

Yes, if you’re in Cape Town Table Mountain is a must see. However, you will get much more of a sense of traditional South African cultures away from the tourist hot spots and the cosmopolitan cities. There is much more to see in and out of cities than those just listed in tourist guide books / travel forums. The rural areas are where you will get to learn more about the many cultures that make up the rich tapestry of South Africa’s tribes and people. Away from the cities you will see the beautiful landscapes; vast, arid planes, beaches, sand dunes and rugged coastlines that make South Africa so special.

Be on your guard and wary of safety issues.

South Africa has a reputation for being very dangerous however, as long as you follow simple safety guidelines, just as you would do anywhere, you should be fine. These include:

Talk to local people when you get the chance.

This is the best way to find out more about them and their beautiful country. Rather than surrounding yourself by tourists, explore the local’s choice in hotspots and get chatting!

Research any organisations or companies that you are using for trips and tours.

This is especially true for anything that could be controversial. Make sure your visit to a cheetah reserve doesn’t end up with you supporting animals being bred in captivity. If you’re planning to take township tour or similar, make sure the organization is one that works positively with the community (or, even better that the tours are run by community members). Make sure any trips you take part in are ethically sound for the people and animals involved.

Buy from and support local, small businesses as much as possible.

In many cases you might just help feed a family by doing so or at the very least, will help their business grow and expand. Where possible it’s also a great idea to leave reviews for any services you receive as it helps the business and the people coming along after you.

Don’t gloat about the exchange rate!

Yes, if you are spending GBP or USD (or pretty much any currency other than ZAR) you’re in luck and almost everything will be much cheaper than what you would pay at home. However, people who live in South Africa (whether South African born and bred or, like me, who choose to live there) will likely get paid in ZAR. Therefore, the R800 meal that seems like such a bargain to you could be a whole week of wages to someone else. If you spend your whole time telling people how cheap everything is, you will not only upset but also offend, locals.

Understand that the South African nation does not consist only of people who don’t speak English, wearing traditional African dress.

There nation is made up of a huge cultural mix of people and their heritage and 11 official languages. South Africa is home to people from all over the world going about their daily lives; they have jobs, go to school, buy groceries, go drinking, socialize with friends, play sports and go on Facebook.

There are different norms and standards of what is and isn’t acceptable depending were you are in the country. In bustling towns, it is ok to dress, for the most part how you would do elsewhere. In Zulu villages, women shouldn’t show their thighs with short shorts. If in doubt, be respectful and cover up.

It goes without saying that in addition to these suggestions, it is important to be respectful of the people you meet and culture you come across. South Africa can vary from being worlds apart from what you’re used to, to not that different (other than the weather!) It is a magical country where people are friendly and welcoming. Global Handprints gives people like you guys, the opportunity to leave your mark on the world through volunteering and travel. In turn, with your support, Global Handprints is able to invest towards our social purpose, enabling projects and communities around the world to evolve and develop.

Find Out More About Our Projects

Inspiring you to become a Global Citizen, empowering your achievement and evolving locally established projects to meet the needs of their communities

Did you know that a group of hippos (or hippopotam

When you're not on placement with us, there are pl

Many people don't realise Durban is a perfect mix

Lunchtime at Namawajjollo Primary (and many other)


Error: API requests are being delayed for this account. New posts will not be retrieved.

Any cookies that may not be particularly necessary for the website to function and is used specifically to collect user personal data via analytics, ads, other embedded contents are termed as non-necessary cookies. It is mandatory to procure user consent prior to running these cookies on your website.